Measurements taken of ozone produced by motor car pollution in the city of Lille, and measurements taken of ultraviolet radiation coming through the ozone layer were transformed into sounds via the Internet that were projected onto the streets of Roubaix and in the garden of the Old Treasury Building in Adelaide. 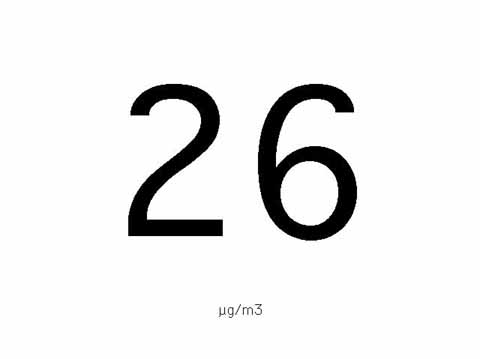 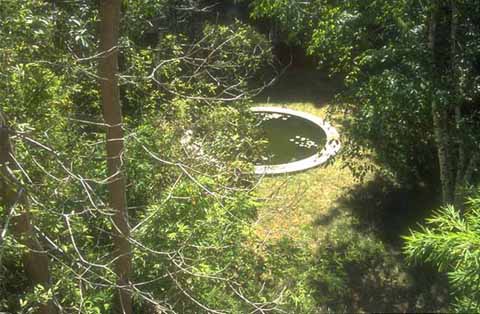 Picture from the installation at the Adelaide International Festival

This installation is a metaphor for an "ozone pump" between the ozone produced by pollution and the naturally occurring ozone, between Europe and Australia, between man and nature. This music is not the creation of one person, but that of human activity on a planetary scale (ozone pollution in the urban environment) and its interaction with the sun.
Sounds are activated from afar by untouchable factors, but still result in a complex interaction between man and the world.

In a poetic way, Ozone portrays what is considered to be a major ecological problem for Australians, i.e. the hole in the ozone layer. A paradox is apparent in the dissemination of ozone: it is produced in too large quantities by cars in the city, but is now depleted in the stratosphere. The hole in the ozone layer has caused an alarming increase of skin cancer cases in far-off Australia, to such a degree that the problem has become a tangible social phenomenon. Australian children learn how to protect themselves from the sun at school.

Planetary interdependance:
It becomes more and more apparent that our destinies and actions are linked with those of all human beings, even those at the far end of the planet. A planetary solidarity, a global consciousness is slowly emerging. The beauty and poetry of distance is essential for this to take place. It allows us to expand the focus of our counsciousness.

The ozone project expresses this mix of unease and astonishment in the face of the interdependance of terrestrial phenomena.

Immateriality and complexity:
The project also expresses the immateriality and complexity of phenomena that contemporary man must confront. The ozone and UV rays are factors of complex phenomena where human physiology is affected by economic development.
These factors are nevertheless impalpable, immaterial, and are related to information (and misinformation).
This project uses what man, in the face of complex phenomena, has called fate.
And it updates a debate that has been a permanent fixture in art, philosophy and science.

Beauty of a distant presence: my consciousness is shared between here and there, between another and myself. I  participate from afar.

Sensuality of distance: not being able to see reorganises our perception, heightens our auditive sensuality. This blindness is a source of inspiration for the imagination.